It was the research for this trip that sowed the seed for this website – discovering both Tom King's book and a set of detailed maps on the evening before setting off, I thought it would be great to have a site to collate what I had discovered in various places. I had been interested to visit the Hoo Peninsula for a while, and reading "there is a tremendous sense of openness, with extensive marshes, the wide river and fantastic skies" in the otherwise rather dry commentary on the Thames Path survey sealed it.

I took the train out to Rainham, and cycled past the wetlands into Purfleet. Sadly the buses taking cyclists over bridge / through the tunnel no longer exist, but there's a free dial-a-ride service available. On the south bank I stuck to the main roads not wanting to waste time to get to the Hoo, which didn't make this the most pleasant stretch of the ride. After briefly paying my respects to Pocahontas in Gravesend I soon left built-up areas behind, and was out on the flat marshes, on a perfectly straight cycle path (next to an equally straight ditch and railway embankment). At some point I took a left turn out to the remnants of Shornmead Fort, where I re-joined the river, which for most of the next few hours would remain staunchly to my left. The guys on dirt bikes who kept running their machines up and down the embankments reminded me of the days when bikers used to frequent the Greenway on the section which now sits right adjacent to the olympic stadium – which now seems a long time ago. I found their presence mildly unsettling, and was happy when the roar of their engines had become but a faint noise in the far distance. By then I considered myself quite far from civilisation and was rather surprised to suddenly encounter a group of around 40 ramblers on the narrow path  between Cliffe pools and the river – a Christian walking group. It was a welcome counterpoint to the vague sense of threat (probably entirely unjustified, after all, they were just enjoying riding their bikes) I had felt 20 minutes earlier. It gave me an idea how broad an appeal this landscape had, providing a background for people with a diverse set of interests. Moments later I passed a burnt out car wreck in the ditch to my right. And then the remains of the Hans Egede to my left.

I encountered a few more people around Cliffe fort, but then not a single soul once I left the RSPB site behind. It was a bliss. Barely 30km (as the crow flies) from my home in the midst of the metropolis, and not a single living soul anywhere to be seen. The long grass swaying in the summer wind, the sounds of birds, and that was it. The only trouble was, I had been riding for some time now, the sun was rather strong, and I had exhausted most of my drink. I also hadn't packed that much food. And the rather uneven path made the made for rather uncomfortable cycling. At Egypt Bay I therefore abandoned my plan to go to Allhallows, left the river behind and veered off inland, heading for the bright blue tankard on my OS map.

I was rather exhausted by the time I arrived at the Red Dog in High Halstow, and was rather relieved their kitchen was open. I had a very nice meal, a lot to drink and a welcome rest. With topped up water bottles I set off again and went back to Gravesend via quiet country lanes, eventually re-joining the cycle path along the railway embankment, and into town. I slept very soundly that night. And vowed to take sun cream on my next outing – which of course I didn't.

(A note of caution: the entire stretch between Shornmead Fort and Egypt Bay along the river front is not ideal cycling terrain. It's more a footpath. It is rideable, even with narrow-ish tyres, but it's not very smooth riding. The path is uneven, quite narrow, in parts overgrown, and I had to haul my bike over quite a number of stiles / field gates. To me, that's part of the fun, and I'd thoroughly recommend it – if the path was smoothly surfaced, no doubt it would attract more people and that would most likely spoil the sense of remoteness, which (to me) is the main reason for coming here. I'm just saying this so you you know what you're letting yourself into, should you want to do this ride.) 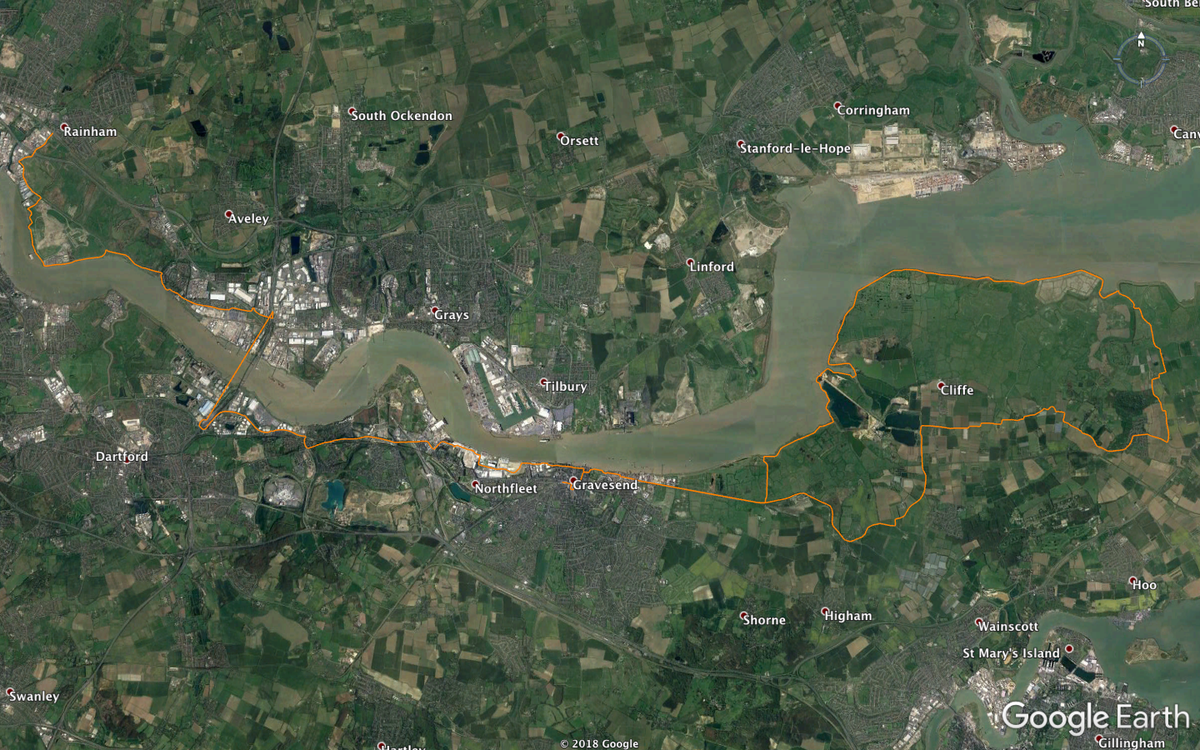